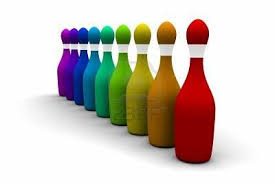 After many decades, I’ve picked up a bowling ball again and joined a league. For years I’ve been wanting to participate in one Las Vegas’s gay bowling leagues. And, so, this fall I’ve rearranged my schedule, walked away (for a bit) from a long-running Wednesday evening writer’s group (they’ll get on without me), and joined the GLBT Bowling League.

I went to the first night organizational meeting and after the meeting there were three bowlers with no team, so we became a team (missing one). We named ourselves The Oddballs because we were the odd men out. And, we started bowling. It took us a few weeks to find our footing and then we added our fourth bowler. We had a full team.

Over the past two months we’ve gotten to know each other and lots of other bowlers (most of whom are gay or lesbian although we also have a few allies on the league). We’ve also been doing rather well and are up in the top of the rankings. It’s a handicap league which is great because each week we are even with all the others in the league. Everyone does their best and we have a lot of fun.

It’s nice to be on the lanes again. Some of my techniques from childhood (I was a pretty good bowler as a kid) work, some don’t. And, we just bowl. The other thing I like is that even though there’s a bit of competition, people are very nice and incredibly supportive. We clap and high-five our own team members strikes and spears, as well as those of the opposing team–and usually the teams bowling on the lanes next to ours. I really like that.

One thought on “Gay Bowling”