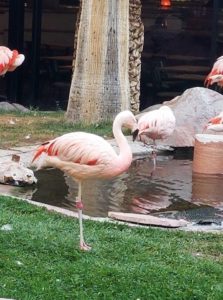 Went to dinner at Guy Fieri’s Vegas Kitchen & Bar at the LINQ. The style in the place was great and the service was solid. I do find it bothersome that at the Caesar’s properties the employees no longer wear name badges or introduce themselves using their names. While I get the feeling that this is a security issue it makes for a service problem because you can no longer direct questions or needs toward the staff in a polite fashion. Now it’s more a “Hey, you,” thing which feels rude.

We’ve eaten at Fieri’s place at the Rio and the Vegas Kitchen is the same. Our general take:  the food is geared toward drinking and being able to say you ate at Guy Fieri’s restaurant. The food feels like its based in interesting concepts, but the bold flavors often overwhelm the proteins. That was certainly the case with the Lobster Tacos tonight. Loved the heat and sweat combo, but the lobster gets lost in translation. We shared the Lobster Lollipops, too. Both the dishes were over cooked. I do think it’s probably difficult to tempura fry lobster and not arrive at an overcooked state.

Todd had the Baja Bowl with chicken. Like the lobster, the chicken got lost within the bold flavor profile. He also pulled dozens of slices of jalapeno pepper out of the bowl. If he’d eaten all of those he wouldn’t have been able to taste anything.

And, then, we shared the layered chocolate cake. Incredibly rich and decadent, the dark chocolate base was lost behind the overly sweet white chocolate and caramel sauces and the addition of chocolate chips was overkill.

I think in general, good food should stand on its own. There’s no need to overpower the base with sauces. And, yet, because of the great service and atmosphere I say give the place a try…especially if you can do it on a comp, like we did. It’s great to try places when you don’t have to pay the check. Gambling does offer perks.

The reason for the flamingo pic…I parked at the Flamingo valet and got to walk through the Habitat on the way to Guy’s restaurant. It’s one of my favorite Vegas places.