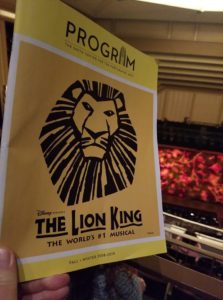 One of my favorite places in Las Vegas is the Smith Center. We hold an annual subscription to the Broadway Series. (We used to have a subscription to the Las Vegas Philharmonic, too, but our conductor is so bad we had to cancel. When and if they replace him, we’ll return.) The latest show was The Lion King. It opened on Broadway while I lived in New York and I remember the controversy at the time, having Disney come to Broadway was quite controversial a few decades ago. And, then Taymor created this amazing theater experience, so different from anything anyone had seen before. And it continues to run and tour and thrill audiences.

By far, one of my favorite moments in the show is the opening parade and final tableau. As the elephants joined the scene on stage the audience I was with actually applauded. These amazing costumes, a blend of puppetry and artistry and human invention create an amazing experience. In a similar way, the opening of Act II, with the simple but beautiful birds, creates magic in the theater.

The plot itself is your basic good over evil thing, very Disney, very straightforward, and a bit lame. But, it’s classic storytelling all the same. And, in the end, we arrive back at the top of Pride Rock, the Circle of Life, another tableau (sans elephants this time–something I’ve always wondered about) and the story arc/circle is completed. Along the way, there are amazing costumes and images created on stage, which is really what I love about the show.

Nice to see it’s still holding up and pleasing audiences. It’s always great to see the Smith Center packed to the rafters–a gem in the desert being utilized.